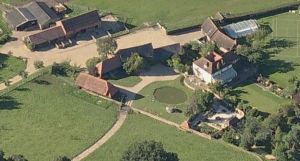 Some of the farm buildings date from the 16th Century and have been carefully maintained through the years by the Hall family.  They are still fully active, holding vintage farm equipment which is still in use to this day, as well as the farm’s bountiful array of rare animals including cattle, horses, poultry and swine.

The farm has seen many changes in it’s use, which is reflected in the buildings surrounding the homestead.  After the war, it became a poultry farm and dedicated buildings were established in the pursuit of efficient chicken production.  For a while, it was a dairy and the brick buildings which can be seen on the North Western side of the yard form the remains of the dairy production facility and now are used as feed store, pig pens, tack room and horse stand.  Behind this is the cattle barn, in which the British White cattle shelter from the chill of winter and receive their feed dawn and dusk.  Next to this there were WWII Nissen Huts, containing endless paraphernalia, now since removed and put over to the care of rare breed horses and poultry.

A main attraction of the pond and yard area, is what’s know as the ‘Black Barn’ – a historic Threshing Barn, now lovingly restored and full of attraction and intrigue, including displays of ingenious farming equipment and items of historical interest.  This site is extensively used for visiting guests and open days, since the fields are given over to pasture for the herds and crops are no longer grown.

The farmhouse itself is a beautifully proportioned square shape in the style of farmhouses of the 18th century, with a tiled pitched roof featuring an extraordinary ‘well’ at the center.  Beneath the house are old cellars, which used to contain the wood and coke for the solid fuel burner.  The house and buildings are surrounded by enormous water storage tanks, only recently rediscovered and put back into service following extensive re-conditioning and re-piping to irrigate the gardens and water the livestock.